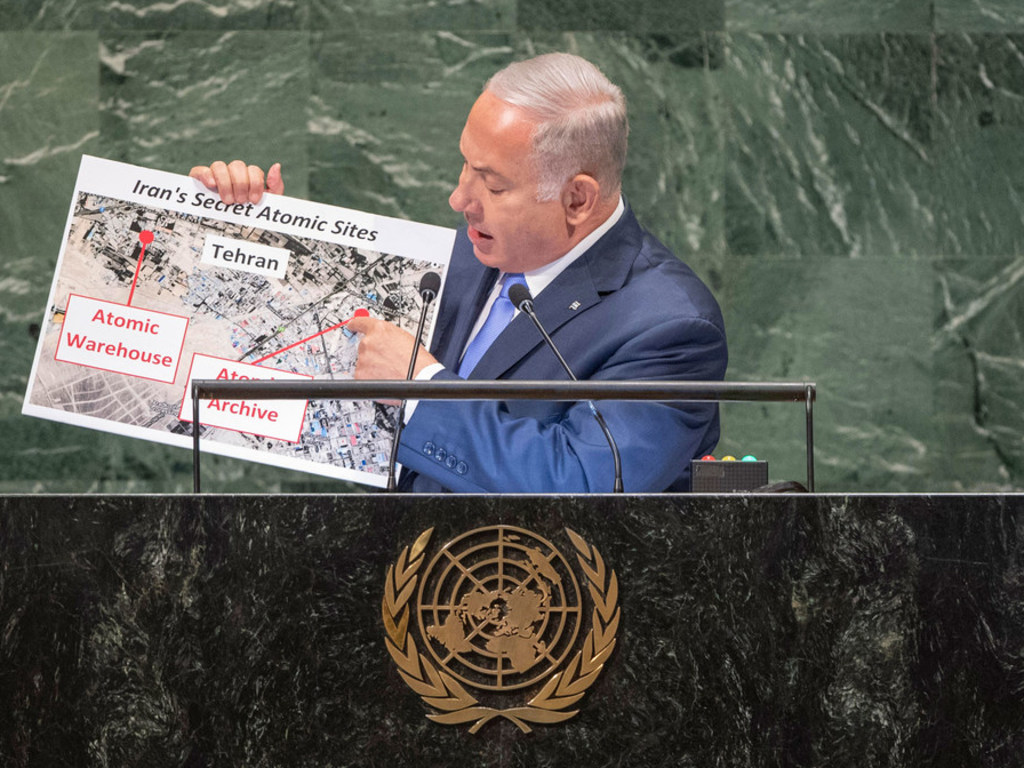 Late September is the time of the year in which world leaders converge in New York to address the United Nations General Assembly. It is customary that political leaders use their time on the podium to deal with a range of topics marking the international agenda. However, that is not the case of Benjamin Netanyahu, the Prime Minister of Israel.

Not that this is a big surprise, since it is not the first time Netanyahu builds an almost mono-thematic discourse in international fora. Nevertheless, when we compare his speech with that of Donald Trump (hardly an example of traditional diplomacy) we discover that the US President dealt with topics ranging from world trade and the situation in the Korean Peninsula to (unsurprisingly) Iran.

Netanyahu’s speech, on the contrary, intended to deliver only two messages. The first, the one to which he devoted more time, is that Iran is a danger for Israel and the whole world. The second is that Israel is a Jewish and democratic state, a “shining example of freedom and progress”. While the first argument has been around since the removal of the Shah of Iran in 1979, specially during Netanyahu’s current premiership, the second argument is even older.

In fact, it is as old as the State of Israel itself. The foundational myth of Israel is not so different from the one (fervently embraced by Ronald Reagan) that presents the United States as “A Shining City Upon A Hill”, a lighthouse in the darkness.

However, we should not obviate that Netanyahu’s speech is also a product of the times in which we live. His use of images of alleged Iranian nuclear facilities is visually powerful in the age of Twitter and 24/7 news channels, which used the footage of Netanyahu holding the pictures to report on his speech. This was accompanied by Netanyahu’s evident skills as a public speaker.

The content of Netanyahu’s speech, however, does not even resist the most superficial kind of fact-checking. The protests within Iran to which the Israeli Prime Minister refers have been far less widespread that he would like to think when he says that the Iranian people “are rallying against the regime”. Moreover, what Netanyahu passionately presented as a facility with “300 tons of nuclear related equipment and material” actually contains nothing but “file cabinets and paper”.

The blatant lies pronounced by Netanyahu regarding nuclear weapons in Iran ultimately brings to us memories of Former US Secretary of State Colin Powell. Netanyahu’s pictures do not have more credibility than those shown by Powell in 2002, when he went to the United Nations Security Council to alert about Iraq possessing Weapons of Mass Destruction.

It is also cynical for Netanyahu to say that “three years ago, Israel stood alone among the nations” in opposing the Iranian nuclear deal. By saying this he implies that a big change has occurred since then. While Trump’s decision to violate the agreement is of great relevance, the number of countries supporting the Iran deal has barely changed.

A clear disrespect for truth is also present in the second block of Netanyahu’s speech, the Israeli-Palestinian issue. When he says that UNRWA, the UN organization providing help to Palestinians in humanitarian need, is perpetuating the refugee problem, he really means something else. As Professor Ramzy Baroud has noted, the Israeli assault on UNRWA aims at stripping the status of refugees from millions of Palestinians, thus taking the “right of return” off the table once and for all. At the same time, Netanyahu’s assertion that the Israeli army upholds “the highest values”, a reference to the “purity of arms” myth debunked by, among others, Professor Ilan Pappé, does not hold when we consider that thousands of Palestinian civilians have died because of Israeli military occupation.

Despite the different factual faults we have described above with an illustrative (not exhaustive) intention, it would be a mistake to label Netanyahu’s speech as a failure. As political analyst Ben Caspit has underlined, while the Israeli leader was talking in New York, his target audience was his Israeli constituency, not the mandataries assembled before him. Netanyahu’s aides even managed to move the initially scheduled time of his speech so that it coincided with the prime time in Israeli television.

Yossi Verter, a political analyst for Haaretz, a newspaper outside of Likud’s political spectrum, wrote that “the prime minister formulated a precise and credible indictment against Iran”. The “Iranian threat” is clearly something around which different sectors of Israeli society can coalesce. Netanyahu’s speech was built on shaky foundations. Nonetheless, the art of rhetoric and the coincidence of its content with the feeling of many Israelis resulted in the speech being very well-received in Netanyahu’s home country. And perhaps this is what really matters for him.