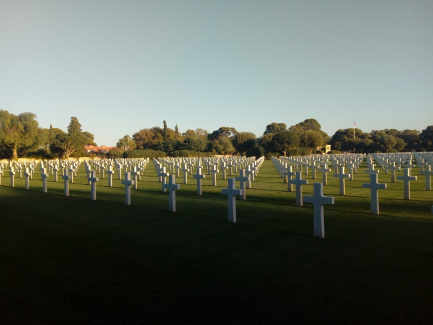 Around 20 km away from Tunis, a US flag at the top of a mast can be seen driven with the wind, which is a frequent visitor in this part of Tunisia. The flag does not belong to the US embassy compound, though the diplomatic mission is to be found nearby. In this case, the Stars and Stripes presides over the North Africa American Cemetery and Memorial. The cemetery is the burial place of 2,841 men who found death “in military activities ranging from North Africa to the Persian Gulf”, as explained by the American Battle Monuments Commission. In fact, most of these men died after the landings of Operation Torch in November 1942 initiated a campaign to regain control of Morocco, Algeria and Tunisia for the Allied Forces. The three French colonies had been subjected to the Vichy collaborationist regime after the occupation of France by Nazi Germany in 1940.

The cemetery finds itself close to the ancient site of Carthage, from where Hannibal Barca departed to cross the Pyrenees and attack Rome in the 3rd Century BC. While the Carthage Archaeological Site is one of the main tourist attractions of Tunisia, the North Africa American Cemetery receives far less visitors. However, and despite the 7,400 km that separate Tunis from Washington (the distance reaches 10,000 km if travelling from the West Coast), numerous are the visitors from the US that visit the Carthage Memorial. When I visited the place in early November 2018 and checked the visit book, around a quarter of the entries were written by people coming from the United States. Many were probably visiting the resting ground of their relatives.

The cemetery is taken care of by a formidable team of gardeners (the pictures in this article bear witness of their superb work) and other personnel that seems to belong to the US diplomatic mission. Taking into account that almost 3,000 soldiers are buried in Carthage, there is always the risk of forgetting that every single man who found death in North Africa had a particular story behind him. To avoid this, the American Battle Monuments Commission provides the visitor with a leaflet describing the life trajectory of some of the soldiers resting in the cemetery. Thus we know the story of Private Robert F.Horr, a Marine who died during the effort to open up the port of Oran during Operation Torch (see a picture of his gravestone below).

The Carthage Cemetery is not only a memorial site, but also a product of the time in which it was built. This is what comes to mind when one encounters, in one of the walls of the gallery that leads to the graves, a description of the military and food aid provided by the US to the USSR during the Second World War (see the picture below).

In fact, the origins of the place bring us back to the late 1950s, when Tunisian President Habib Bourguiba, who pursued a non-aligned international policy, ceded to the US the plot of land in which the North Africa American Cemetery and Memorial is located. In the middle of the Cold War, the US wanted to be assured that the visitor of the Carthage Cemetery would be able to read that, although the USSR lost at least 50-fold more citizens than the US in the Second World War, US economic aid was decisive in defeating Nazi Germany. Almost six decades after the North Africa American Cemetery and Memorial was dedicated, the site is certainly a must-see for history passionate.