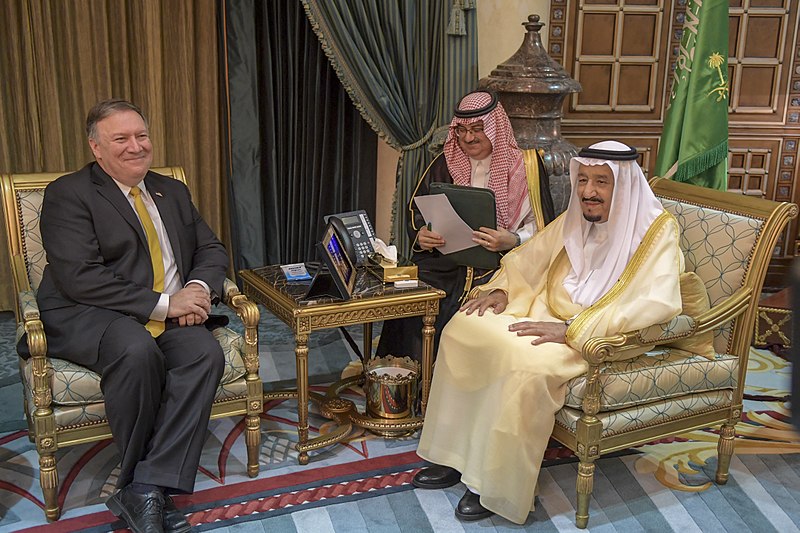 The United States Secretary of State Mike Pompeo published an article in the November/December issue of the influential journal Foreign Affairs. In his piece (which can be consulted here, in the website of the US Department of State), Pompeo deals with the US policy vis-a-vis Iran. The US top diplomat does not introduce any major argument in his limited dialectical arsenal. Nevertheless, his 10-page-long article titled “Confronting Iran” provides an interesting opportunity to reassess the attitude of the US Administration regarding what it sees as “The Iranian Threat”.

Getting the Iranian polity wrong

Pompeo’s piece shows either lack of knowledge or intentional inaccuracy regarding the functioning of the Iranian polity. The Supreme Leader of Iran, Ali Khamenei, is presented as being almost the only power broker in Tehran. The Grand Ayatollah is the most influential individual in Iranian politics in his role of non-popularly elected ultimate political arbiter. He is  at the apex of the most important center of power in Iran, but the key idea here is that there are different centers of power. These institutions (the Parliament, the Presidency, the Judiciary…) enjoy different degrees of autonomy in their relation with the Supreme Leader. What’s more, the margin of maneuvering at their disposal is in constant flux.

Pompeo seems to have a special predilection for overstretched analogies. He begins by comparing the Iranian case with the situation in North Korea, as in his eyes the two countries present a comparable threat. One simple fact should suffice to show the extent of the differences between both cases. While North Korea obtained the nuclear weapon more than a decade ago, even the most alarmist and biased observers (people like Benjamin Netanyahu) ascertain that Iran is months away from going nuclear.

At the same time, the negotiations with North Korea over its nuclear program are presented as an example of useful diplomacy in comparison with the Iran nuclear deal, officially known as the JCPOA. Nevertheless, reality is stubborn. On the one hand, we have the last report of the International Atomic Energy from November 2018 explaining that once again Iran was found to be complying with the JCPOA. On the other hand, nothing tangible has yet emerged from the Trump-Kim Jong Un meeting in June 2018. The neo-conservative magazine The Weekly Standard concluded in November that “the Trump administration’s North Korea policy is failing”. According to their view, “Kim is expanding rather than reducing his nuclear program”.

But Pompeo’s tendency to resort to ill-conceived analogies does not stop here. For him, Iran is nowadays in a situation similar to the one faced by the USSR during the 1980s. The Evin prison in Tehran, an infamous place of detention and execution of thousands of political prisoners during the Shah’s and the Islamic Republic regime, is the Iranian version of the Soviet Lubyanka. The Manichean speeches of Reagan regarding the evilness of the USSR can be perfectly used to describe the Iranian regime.

A great deal of hypocrisy

The article contains a great deal of hypocrisy as well. Pompeo assures once again that the re-imposition of US sanctions on Iran are targeted at the political leaders of the country and will not affect the trade of humanitarian goods. Numerous are the reports, however, that point in a different direction. One of the most worrying situations is the one Iranian cancer patients have to face, dependent as they are on the import of pharmaceutical products for their treatment.

The US Secretary of State is not more honest when talking about human rights violations in Iran. The Islamic Republic is one of the top violators of human rights in the world and he is accurate when describing some examples of unacceptable behavior. Specially execrable is the fact that Iran is the country executing more people per capita every year, some of them minors or political opponents. However, Pompeo is clearly not the right person to carry the banner of respect for human rights. He is a well-known defender of torture and the US official who paid a friendly visit to Mohammed Bin Salman amid the public condemnation of the killing of Saudi journalist Jamal Khashoggi, which was order by the Crown Prince himself.

The top level of ridicule is reached when Pompeo describes a Donald Trump tweet threatening Iran as “informed by strategic calculation”. It takes courage to portray as a well-thought diplomatic movement what really appears to be an angry and spontaneous outburst.

Pompeo’s piece can be defined as an exercise in hypocrisy and intellectual poverty. His article reads like an articulated list of the very same arguments Trump and himself have repeated once and again. Their use of simplistic terms is recurrent. Iranian behavior is defined as malign three times in the text, which in fact is less than one could expect given the Trump administration’s attachment to the term. Any expectation of a different attitude concerning Iran in the last two years of Trump’s mandate would have little foundations.

One thought on “Mike Pompeo’s article in Foreign Affairs: An Exercise in Hypocrisy and Intellectual Poverty”