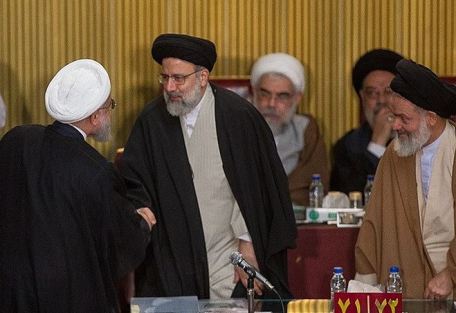 Saikal, director of the Centre for Arab and Islamic Studies at the Australian National University, begins his book by describing the Pahlavi period before rapidly moving to an analysis of the 1978-79 Iranian Revolution. The author ascribes Khomeini’s capacity to create an Islamic Republic out of a pluralist anti-Shah movement to the Shia Islamist faction having better organizational networks. Moreover, Saikal defines Khomeini as “one of the most astute theo-political leaders in modern history”.

In order to account for both change and continuity within the Iranian polity, Amin Saikal uses as an analytical framework the jihadi–ijtihadi paradigm, which he considers to be a main driving force behind post-revolutionary politics. Whereas the jihadi dimension is related to a combative and revolutionary approach to Islam, the ijtihadidimension is based on “a creative interpretation of Islam according to changing times and conditions”.

Saikal resorts to a powerful metaphor and describes the jihadi-ijtihadi paradigm as a pendulum that swung in the ijtihadi direction with Mohammad Khatami’s election in 1997 before moving in the opposite direction with the election of Mahmoud Ahmadinejad. The oscillations of the pendulum are, at least in part, the result of the relative success of the different Iranian political factions (traditionalists, pragmatists and reformists).

The first years after the Shah’s overthrow are described as dominated by jihadi forces, although Saikal considers that even Khomeini resorted occasionally to a ijtihadi approach. In fact, the political system of the Islamic Republic crafted by the Ayatollah is the result of the cohabitation of both tendencies. The Afghan scholar defines the system as “innovative in combining transcendental theocratic aspects (…) with institutions that seemed almost liberal”.

Thus, the structure of the Iranian polity is, in Aikal’s words, “two-tiered”. While the Presidency and the Majles are popularly elected, the candidates can be vetted by the non-accountable Council of Guardians and the Supreme Leader constitutes the ultimate political authority in the country, reigning over elected officials.

Amin Saikal devotes a whole chapter of his book to analyse the resource capabilities of the Islamic Republic of Iran. While this may seem surprising at first sight, the author’s assessment proves helpful in understanding why the Islamic Republic has come out of multiple internal and external turbulence relatively unscathed. In the economic realm, Iran presents endemic problems such as political and oil rentierism together with poor economic management. However, Saikal argues that the Iranian economy has not collapsed due to the existence of a well-educated workforce and vast natural resources.

When it comes to the military dimension, the author presents Iran as a country ill-suited for prolonged offensive efforts but at the same time well-prepared to impose enormous costs on any country that seeks to invade Iranian territory. The book also explores Iranian soft power, presenting the Islamic Republic anti-hegemonic rhetoric as a source of power projection beyond the Middle East.

Saikal’s analysis would surely profit from a more comprehensive approach to the concept of power in International Relations. While his considerations are clearly influenced by realist and liberal theories of International Relations, a constructivist approach is lacking. Such an approach could help us understand how Iranian power is perceived differently around the Middle East and the rest of the world depending on the identity of every country.

Iran Rising includes two chapters dealing with the external relations of Iran in the post-revolutionary period. Saikal stresses that “the Islamic Republic’s relations with all major powers have primarily been influenced by its adversarial relations with the United States”. At the same time, he explains that some US decisions in relation with the Middle East, ranging from the Afghanistan War to the recent Qatar blockade crisis, have empowered the Islamic Republic. Saikal also notes that Iran has also incurred in self-defeating behavior when fueling geopolitically driven sectarianism.

Perhaps more important for its future policy implications is the author’s assessment that, even though the Islamic Republic faces important challenges, it has already established itself as a resilient and influential middle power in the international stage. Saikal advocates in his book, as he has done in the past, for the outside world to deal with Iran in an informed and realistic way, taking into account that reformist tendencies within Iran are likely to garner more and more support in the coming years.

Iran Rising is an example of the informed approach to Iran defended by Saikal. His work is well-researched and includes the influence of nationalism and pragmatism in Iranian politics, something that contrasts with many accounts that simplistically portray Shia radicalism as the key element to understand the Islamic Republic. Such narratives become especially dangerous when embraced by individuals in high positions of power, as it happens with U.S. National Security Advisor John Bolton or U.S. Secretary of State Mike Pompeo. Whereas Saikal’s book would have improved with the inclusion of primary sources, there is a remarkable originality in his analysis. In a context marked by the hawkish Iran policy of the Trump Administration, Saikal’s voice is badly needed.

Title: Iran Rising: The Survival and Future of the Islamic Republic